Born of a fusion between West African Vodun and Roman Catholicism, Haitian Vodou is a rich religious tradition full of drama and devotion. Vodou is syncretism at its finest. Catholic saints have been seamlessly incorporated into the iconography of Vodou’s own roster of spiritual personalities, the lwa who serve Bondye the creator and who are served in turn by human beings. Many of the lwa can be traced back to gods of West Africa and the Kongo, but in crossing the Atlantic with the millions brought over on slave ships, they have taken on new attributes and character reflecting local concerns.

One of these goddesses who has transformed into a Haitian lwa is Mami Wata. Venerated across much of Africa, Mami Wata is an exotic merwoman associated with wealth and fertility. Her half-fish, half-woman form represents the dualism of the sea over which she presides: The sea can offer its bounty to fishermen, but it can take lives in a storm. Similarly, Mami Wata can be a benevolent promoter of fertility or a cruel withholder of wealth. Although both men and women give Mami Wata her dues, women have always played a special role in her worship, some becoming mamisii, her priests. For hundreds of years, European mermaids have heavily influenced depictions of Mami Wata, which fits her connection to the liminal Mediterannean. Today her iconography in Africa has undergone further changes thanks to posters of Hindu goddesses that began to circulate in the mid-20th century, visually distancing her from her incarnations in the Americas, where she retains her nautical association but has taken on many new names. In Haitian Vodou she is called La Sirene and La Baleine, the siren and the whale, so it is this iteration which we will feature today.

Like Mami Wata, La Sirene rewards her followers with wealth. Her favourite offerings are mirrors and combs – classically associated with mermaids – as well as jewellery, seashells, sweet treats, and anything in her colours of blue and white (which are not coincidentally colours associated with the Virgin Mary). As one devotee advises, La Sirene deserves “only the best you can afford – do not scrimp here!”. Her own wealth comes from the pearls and sunken treasures that litter the ocean floor. In common with many mermaids, she is seductive, tempestuous, musical, and vain. But uniquely, one of her epithets is La Baleine (or Balen in Haitian Creole). When a lwa possesses a person, known as “mounting” their “horse”, their personality takes over and they communicate through the human vessel. In the case of La Sirene, her association with whales leads to a special physical consequence:

La Sirene is also known by another praise name, La Balen. La Balen is the whale. This name refers to the things that lie on the bottom of the sea. Someone possessed by La Sirene may indeed imitate a whale laying on the ground, waving its fins.

I believe you can see this phenomenon in the video below, which shows highlights of a festival dedicated to her Brazilian equivalent, Yemanja, at 2:48 and 3:16. Notice how people are restraining the first woman when she tries to fall into the ocean – La Sirene will try to return to the sea, but it is important for her attendants to stop the lwa from leading her human vessel underwater.

Although Mami Wata is not always associated with a consort, in Haiti, La Sirene is the wife of Met Agwe, the powerful primordial lwa who rules the oceans. Together they preside over a fabulous underwater palace and provide a home to all the enslaved Africans who died at sea en route to Haiti. Some say Agwe’s chariot was pulled by dolphins before he upgraded to more modern boats – like all lwa, he moves with the times. Although La Sirene is not his only wife, in the context of offerings to the ocean they are often honoured together. He and La Sirene are both usually depicted as mulatto, a tradition that goes all the way back to Mami Wata’s origins as a Mediterranean mermaid fused with African water goddesses. 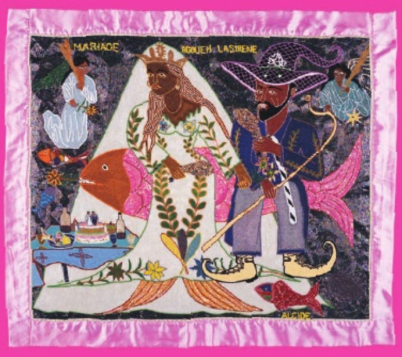 The veneration of La Sirene is not limited to Haiti, spreading with Haitian diaspora across the world.   One Vodou practitioner in Atlantic City describes how he accompanied a group dressed in blue and white to the beach to petition La Sirene for wealth. Offering her and Met Agwe honey and perfume which they poured into the ocean, they were delighted when one of their youngest cohorts broke spontaneously into song:

As we were collecting sea water, we turned around as we heard the six year old daughter of Mari, one of our group members, singing: “LaSirene, La Balene,
Chapo m tonbe nan la mer
hmm hmm hmm hmm hmm LaSirene
Chapo m tonbe nan la mer . . .”
She was singing for Mambo LaSirene in good Kreyol, with the tune, and everything! She didn’t get some lines, but as you can see she got most of it. We were all astounded, as Mari doesn’t even know that song! So you can imagine how we roared into laughter, with much glee. I said to the rest of my children: “If only you all could sing as good as she does!” And we roared out laughing again!

Their offerings to the wealthy lwa of the sea paid off at their successful visit to the casino immediately afterwards. You can hear the song that Mari’s daughter was singing below. The lyrics of this traditional Haitian song refer to a man throwing his hat into the sea while caressing La Sirene, said to be a metaphor for possession or enchantment.

Worldwide, dolphins are the usual culprits to expect when sexual imagery is married with the sea, but in Vodou it is whales who feature more prominently in association with the regal temptress La Sirene. Perhaps it is their great weight, which roots La Sirene to the ocean floor amidst her troves of shipwrecked gold, that connects whales to this aquatic lwa. Whatever the reason, whales too have their part to play in the complex and colourful world that is Haitian Vodou.